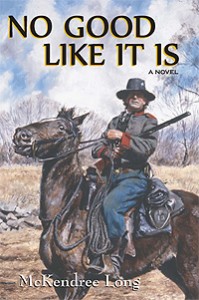 No Good Like It Is is Historical Fiction in which the protagonists, Lieutenant Dobey Walls and Corporal Jimmy Melton, meet and bond at Fort Gibson, Indian Territory in 1858.

Book One  follows their pre-war western service, then tracks them through their Civil War combat with the Eighth Texas Cavalry (Terry’s Texas Rangers).  They are part of the first and final cavalry charges of the Army of Tennessee, play a strange but factual role in the Fort Pillow Massacre, and ride with Shannon’s Raiders, nipping at Sherman’s flanks into the Carolinas. They also manage to spend some time in the White House (“the second best whorehouse in Atlanta”). Throughout his combat service, Dobey agonizes that he’s had no contact with his family since he left home to go to West Point in 1854.

With surrender of the Confederacy imminent, their regimental commander learns where Dobey’s long missing family is and orders the two men to “recon to the West,” in effect to head home before they can be ordered to give up their guns and horses.  Book Two is the story of their trek from North Carolina to the Canadian River in the Texas Panhandle.  Trying to travel light and fast, they’re slowed by encounters with love-starved widows, smugglers, bootleggers, freed slaves and runaways.  Then there are the murderous Home Guard, riverboat thugs, Union deserters, renegade lawmen, a drunken dentist, his prostitute assistant, pitiful refugees, and finally General Stand Watie and his Confederate Cherokees.  From these run-ins, they assemble a small army of strays to accompany them ‘home.’ Does the rag-tag group arrive at Canadian Fort, Texas, in time to save Dobey’s family? Well, certainly not all of them.

This is a winding tale of violence and tolerance, of retribution and changing racial acceptance.  It includes the humor that the author found among men in his two years of combat, but is not so picaresque as “Little Big Man,” nor as black as “No Country For Old Men.”