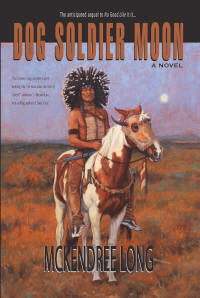 In this sequel to his novel, No Good Like It Is, McKendree Long continues the saga of Dobey Walls and Jimmy “Boss” Melton during the three years following the Civil War. In Dog Soldier Moon, a great crime decimates the tiny Panhandle community of Canadian Fort, twisting relationships and putting Dobey and the Boss on a trail of retribution and frontier justice, yet unaware that they are targets of two Pinkerton teams. Black Kettle, Meotzi, the ‘Boy General’ Custer, and J.B. Hickok flesh out the cast in this all new classic tale.

Jimmy Ridges was finally able to say goodnight to old Chief Black Kettle, and slip into the tipi he’d been offered as an overnight guest. Black Kettle assured him that the owner was on a hunt, and that his wife and children would share a tipi with cousins whose husbands were off away, too.

He had hoped to avoid this camp, but a hunting party stopped him, remembered him from his visit last summer, and insisted that he come see their chief.

And now, he thought, it is really cold, and sleeping under buffalo robes in a tent wouldn’t be a bad thing. In the dark, he pulled off his holster, boots, and heavy coat, put the pistol and Spencer where they were handy, and slipped under the robe, to find a naked body.

“Eeeyah!” He shouted, spun from under the robe and pushed the person down with his left as he cocked and pointed his Navy with his right.

A soft voice whispered, “Do not hit. No shoot me. Please, Boss.”

Ridges exhaled, and flipped the tipi’s door flap open to let in the light of the campfires and moon.

There was muted laughter from just outside. The girl lay shivering, afraid to recover herself with that pistol in her face.  A very pretty face. She’d been Black Kettle’s translator earlier. “Pretty face,” said Ridges, staring at her breasts. He decocked the Colt.

“No. I not Pretty Face. I name Serenity Killer. I put here for you.” She recovered herself.

“Good name.” His own peace of mind, fragile since meeting Amanda Watson, completely disappeared a minute earlier when he had placed his left hand on this girl’s breast in the dark. “Who? Who put you here? This your tent?”

“Tipi. House. Is this where you sleep?”

“No, Boss. I sleep at foot of Old Chief. He put me here. Say you big medicine with Cherokee, white men. Must please you.”

His breathing was almost back to normal. He closed the flap and eased back under the robe, careful not to touch her.  There was more giggling and Cheyenne chatter outside, which he didn’t understand. “You ain’t Cheyenne. Osage?”

She was. When her father died in her thirteenth summer, a trader named John Shelly bought her. Two years later, he traded her to Black Kettle, saying that she made him crazy. When he tried to buy her back two moons later, Black Kettle refused, and two moons after that, old Shelly shot himself, and the Cheyenne changed her name to Serenity Killer. That was three winters ago.

“What was your old name?” Sleep was now out of the question. The dim spectacle of her nudity would not go away.  And she was older, and more experienced than he.

“Did you make him crazy? The old man?”

“Oh, yes. Sometimes he hit me, for my talking. He make me take off clothes and hit me on backside. But then he get confused, and we wrestled some more. He say that make him crazy, too.”

“Oh yes. You like to wrestle? I hope so, because if I no make you make noise, I get beat some. We start now, Boss?”  She started to tug at his pants buttons.

“She not here, Boss. Please don’t make them beat me. We just wrestle some, make some noise, and you sleep better and I no get beat.” She dove under the robes.

“Great moon, sun and stars above!”

“I believe you found your bed warmer satisfactory?” Black Kettle’s question was straightforward, sincere, devoid of leering. He probably knew the answer. Probably spent some time outside their tipi with the others. Serenity Killer translated for them, over morning soup.

“Please take her, then. She makes me crazy. And my other wife wants to kill her. This one never stops talking and her questions make my head hurt.”

Jimmy Ridges hesitated, not knowing what he should offer in return. He’d been planning to ask for her since about three o’clock this morning. In case Mandy hadn’t waited for him.

Mistaking the hesitation, Black Kettle pressed him. “She will keep you warm ‘til you get to Canadian Fort. I’ll give you two ponies, and some robes. You can beat her if she keeps talking. And when she makes you crazy, you can give her to someone else. Or knock her on the head.”

Serenity Killer frowned as she translated that last part. But she never hesitated, and omitted nothing.

They left the camp three hours before noon, to much good-natured cheering and a few gunshots. They both wore buffalo capes against the biting cold, and Ridges held the Spencer up in a parting wave, as Serenity Killer struggled to pull both his packhorse and her spare pony.

“You maybe surprised that I ride. Cheyenne women walk. But old Shelly, he taught me to ride. And other things. But he is dead. I hope you don’t go crazy and kill yourself. You haven’t beat me. And you had lots of fire and movement last night.” She clucked at the horses.

“Listen. About last night …” He lost his train of thought, as he remembered. Again.

“Oh, that was some good wrestling. Better than with Old Chief or old Shelly. I think your woman much lucky. You can have two wives, no?”

“No. And that’s what I wanted to say about last night. You must not talk about that when we get to Canadian Fort.  Leastways, not if Mandy is there.”

“Mandy is your woman?”

“She a good wrestler?”

“She your woman, and you don’t know? My old man Shelly say you Cherokee are strange.”

“Did not want to? You wanted to, last night. You very strange.”

“Don’t interrupt. I was saying, I did not want to make a baby until we can marry. And her father would have shot me.”

“Strange. I have made two babies, but they did not live long. Maybe we made one last night. I hope you don’t want to make one tonight. Serenity Killer very tired. Do Cherokee women walk or ride?”

“Listen to me,” he said. “When we get there in two days, your new name will be just Shelly.”

“Never mind,” he said.  Because with your real name, I might never be able to sell you, or even give you away.

“Where we go now? You have friends we go see at this fort, or just your woman?”

“It ain’t a real fort. There was some Yankee cavalry there before the war, so they changed the name of the place from Canadian Ford to Canadian Fort, see? But it ain’t far and it’s right on the Canadian River there in north Texas, and my friend Captain Walls brought some people there last summer to help his mother run her trading post. Him and his old sergeant-major, Jimmy Melton.”

“They were in the gray army, like you. I saw them when you and them met with Chief Black Kettle six moons ago.”  She had been there as an undeclared interpreter for Black Kettle, to make sure that the Confederate Cherokee translator was honest.

“Same army, but not with us. We fought the bluecoats just east of here, and they was with the Eighth Texas Cavalry, across the big river. Fought in Tennessee, Georgia, the Carolinas.” Ridges watched her eyes to see if she understood.

“I see.” Maybe not. She dropped it. “That place we go to, I think the Cheyenne call it Balliett’s Post.  Old white woman and a crippled man run it, with some Mexicans. Cheyenne trade with them some.”

“That’s Captain Walls’ mother and brother. He had lost track of them for eleven winters before we found them here last summer.”

“Will we stay at this place with them, Boss?”

“I hope so. And that’s another thing. Melton is called ‘Boss’. I guess you better just call me Ridges.”

“I didn’t meet all of your little tribe when you were here before. Who will be there, besides the people that run that store?”

Ridges rode in silence for a few moments as he thought about it. “Well, one of them Mexican girls is the woman of that crippled man. He’s Tad, she’s Carmela, and I think her baby sister is called Manuela. Their father is the old Mexican, ‘Nacio, and he’s the blacksmith. He ain’t got but one good arm. Now stay close. I seen some wolves watching us just now.”

“Yes, Ridges, but they were fat. Them wolves won’t likely attack us unless they’re starving. Plenty of buffalo calves around here. Now, I know these peoples you are telling me about. I have traded with them. Don’t you listen to me? I want to know about the new ones, the ones who came with you last summer.” She clucked as she led her pony and the pack horse in a stumbling, sliding descent into a rocky ravine behind Ridges.

“It helps me to say ‘em all, for me to remember too. So, they’s also Miz Annette, Dobey’s mother. She’s Tad’s mother too. Then there’s the Watsons. Mandy’s mother and father, name of Hazel and Henry. And two brothers, Buck and Button. They might not even be there, as they was hot to get on to Santa Fe. Then they’s Doc Thomason, who you seen before, and his girlfriend Junebug. And a large old black man called Big William who used to be a slave. Like you.” Ridges spurred his horse and clattered up the far side of the ravine. “Now he’s free and he cooks for them. He shot me once. And I guess the most important is Captain Dobey and Boss Melton’s women, Honey and Marie-Louise. They is part black, though it don’t show much. They’s lighter skinned than you nor me. Marie- Louise is the mother. Oh, and she’s got another child, Robert. He’s ’bout full- growed, big and very powerful, very dark. Called Bear. Good fighter and scout.” Ridges smiled at the memory of his trip with them. “They are good friends.”

“Goodness, gracious, you talk a lot. Well if you like them, I will too. Even though they shot you. Maybe that one Bear, maybe he had a different father than the one called Honey. I have seen that happen. Sometimes the mother gets beat because her children don’t look the same. Those wolves ran off now. I think they smelled buffalo. Or maybe a deer. Did the big black man shoot you bad? I have fixed many gunshot and arrow wounds…”

Ridges shook his head and rode on in silence. Serenity Killer. Too right.